Opinions often diverge in Egypt, but one thing almost every Egyptian concedes is that Koshari – a unique Egyptian medley of starches – reigns supreme.

In this article, I will not only give you the Egyptian Koshari Recipe, but also some more background information, as well as where and how to get it in Egypt.

Other popular ways to spell Koshari are: Koshary, Kushari or Kushary.

This post may contain affiliate links. As an Amazon Associate, I earn from qualifying purchases (if applicable). Please see my disclosure for more information.

Koshary is a delectable, any-time-of-day, year-round whole that is far more addictive than the sum of its humdrum base parts: pasta, rice, and lentils.

The magic finish comes from a spicy tomato-sauce topping and garnish of fried onions, all enhanced by garlic-vinegar or chili.

Koshari is one of the most common Egyptian Foods and kind of like a national dish, like Egyptian Falafel (Tameya).

The history of Koshari

This cheap, filling and healthy national dish is so popular that some restaurants in Eygpt, particularly Cairo, specialize in this alone.

But although Koshary was the first Egyptian fast food, little seems known about its genesis.

Educated conjecture suggests that it may have been created out of poverty – filling fare for people who couldn’t afford meat – or that, as vegan victuals, it was influenced by the vegetarian diet of fasting Coptic Christians.

Whatever the case, meat – such as small pieces of fried liver, chicken or lamb – is now sometimes back in the bowl.

How to order Koshari

Whether purchased in a specialized restaurant or from a street vendor, Koshari is often alone on the menu; you need only say what size you want – small, medium or large.

There’s also usually a choice of sauce: garlic-vinegar or a chili sauce as spicy as it looks. Many locals also squeeze in some lemon.

Where to get the best Koshari

For the best Koshari in Cairo, visit Abou Tarek Restaurant in Downtown. You can also book a 5-hour guided street food tour around Cairo and learn more about Egyptian cuisine and flavors.

Pin this KOSHARY RECIPE for later: 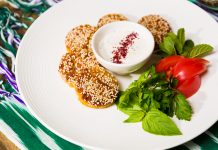 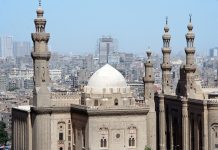